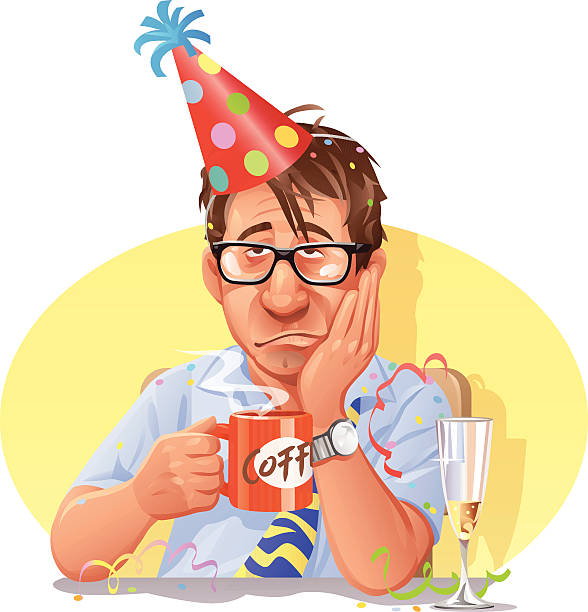 The fortunes of a broad number of counters on the JSE are closely tied to the health of the global economy. For these companies (the likes of Richemont, Naspers and British American Tobacco) They can appear immune to the issues we are having at home.

The balance of our equity market however is directly tied to the local economy – the so called ‘SA Inc’s’ – where their success or failure typically relies on the health of more localized factors such as how much debt the average household is carrying, or general confidence levels and the appetite to spend.

For attractive equity returns from our ‘SA Inc” shares, we require a healthy domestic economy – business, government and consumer.

For some time though, our economy has not been healthy and it should be no surprise that SA Inc equity returns have been week for a protracted period. One of the health checks is to measure how much companies are investing locally for future growth. In the chart below, we can show how closely tied our SA Inc equity returns are to the capital investment cycle of private businesses, which we o over rolling 5-year annualised periods.

Since 1960, private companies in SA have grown their net capital investment by around 4% per year net of inflation. Since 2009 we have remained below this level – essentially a decade of underinvestment by private companies in future growth, which is the longest period of underinvestment we can measure. Worryingly, there are no signs yet of corporate SA spending the cash they have been hoarding for future investment. 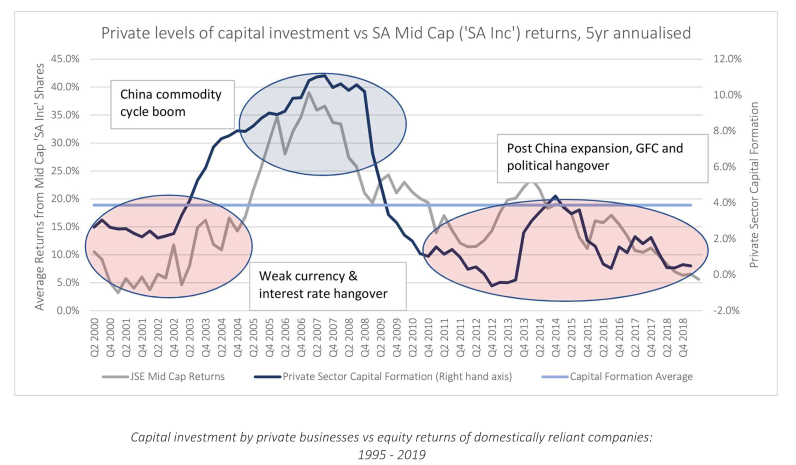 While it is quite easy to lay the blame game squarely at the foot of local politics, we are also quite clearly suffering from a protracted Chinese and Global Financial crises induced hangover. Back in 200/2001 SA Inc found itself in a similar predicament, where the hangover was brought on by a weak currency, high interest rates and inflation low consumer confidence and low appetite to invest.

In this period, we also saw the persistent downgrading of the SA Inc shares, to the point where a broad swathe of the market was priced for bankruptcy.

The hangover cure at that point mostly relied on the largest commodity boom we have seen in history, driven by China’s growth, which created 10 years of insatiable demand for our commodities. While the SA Inc shares are domestically reliant, they also benefit through the miners (who have a global client base) where they provide a range of support to the mining activities. This commodity super cycle was briefly cut short in 2008 when the property bubble in the US started to unwind through what we now call the ‘GFC’. This too contributed to SA’s hangover, with companies globally pulling back on their capital investment.

Increased optimism, a strengthening currency, strong economic policy and even drivers like the 2010 World Cup contributed to a period of significant positive sentiment in SA from 2002 which allowed us to get over the 20%+ interest rate hangover of the early 2000’s. The net result for our SA Inc’s was a five-year purple patch of performance, with average returns of 39% per year.

How does this compare to today? From a valuation perspective the range of SA Inc shares trading at lower valuations is significantly more than any point over the past ten years with 40% of them trading at a PE level below 10x earnings which is cheap. Excluding the GFC, we are closing in on the low valuation levels we last saw on the JSE in 2003. It is no surprise that the investment managers who performed well over this period are currently quite excited.

However, we still need to pass the health checks for these attractive valuations to bear fruit through improved earnings making their way through to investor returns:

What can unlock domestic equity returns?

The following items are health checks which have some role in creating the right environment for good equity returns in domestic shares: 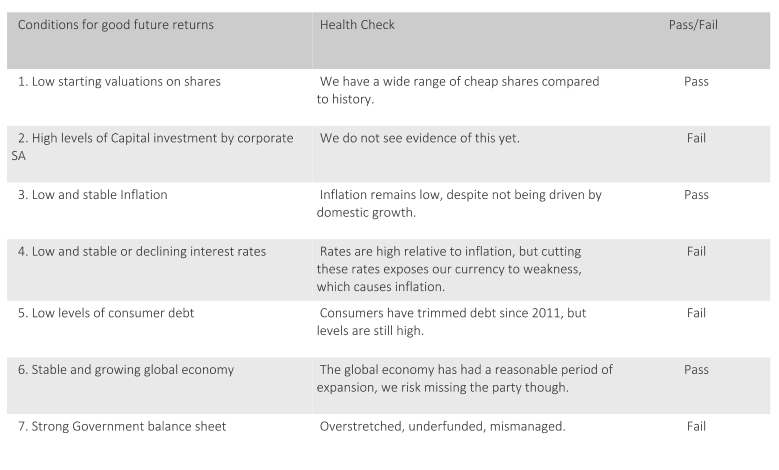 So, while the conditions for good prospective returns are partially there, several items need unlocking. There is no doubt SA has made positive steps of late, and there has also been support from the global economy and the commodity cycle. But the key is the incentive for corporate SA to take on a positive mindset once again, but this time without the tailwinds of the Chinese growth story to give us a big foot up (and we certainly don’t need any more headwinds like the GFC).

This leaves us with much more of an internal reliance than at any point in our history, and the structural weaknesses in our economy are exposed. From here on out our domestic shares will thrive based on their ability to adapt, innovate, expand and survive. Valuations are looking more appealing, in part because it is unclear how these areas unlock. So, while there is opportunity, the hangover remains.

With this in mind, we selectively consider the exposure clients hold in domestically oriented shares relative to the appeal of lower valuations, but bearing in mind the hurdles to be overcome, it pays to be cautiously optimistic at this point.

Open chat
Chat to one of our Financial Advisors!
Go to Top