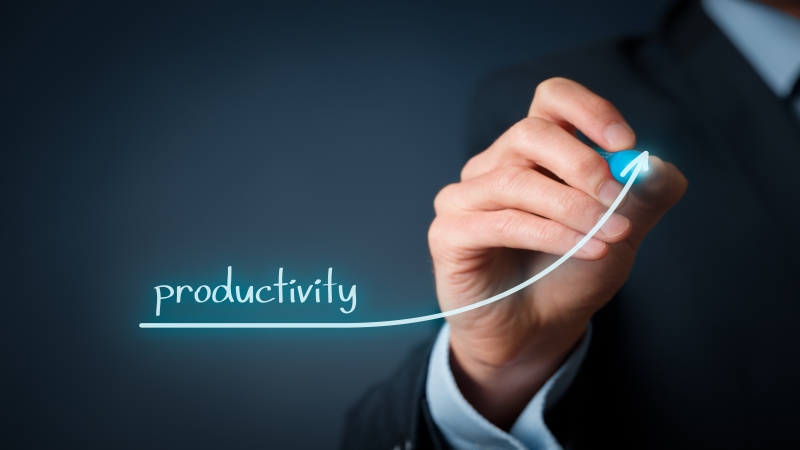 In a time of intense contestation on the correct economic policy for South Africa, economists from the left, right and centre all agree on one thing: productivity matters. As left of centre and self-proclaimed progressive Paul Krugman put it: ‘Productivity is not everything, but in the long run it is almost everything.’ (He won the Nobel prize for economics.)

The different sides in South Africa also agree on how productivity should be improved: more infrastructure, more human capital development (skills, education and training), more technology and innovation, and less corruption, both in the private sector (Steinhoff, Tongaat, VBS) and in the public sector (blatant theft and ‘tenderpreneurship’).

The widely used measure of productivity is gross domestic product (GDP) per hour worked. The South African Reserve Bank (SARB) keeps an updated database on it and that is what we use here.

What is South Africa’s record on this all-important matter?

The SARB graph below depicts South Africa’s labour productivity trends from 1970 to 2019 – a nice long view of 49 years. 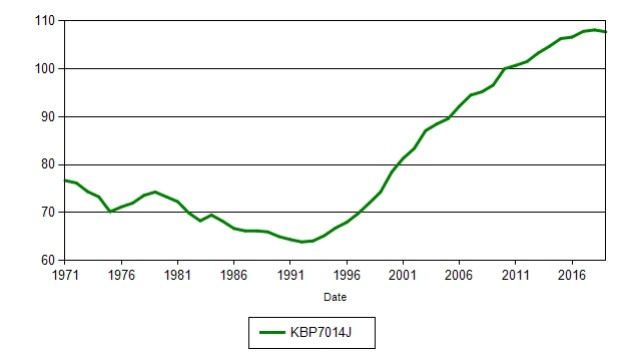 These trends fit like a hand in a glove with per capita income trends. We had a long two-decade decline in incomes from 1975 to 1993, then a strong upswing for two decades to 2014, followed by five years of stagnation. As productivity goes, so does income. Krugman is right – in the long run productivity is almost everything.

Why the Decline and Improvement?

Some want to attribute the decline in productivity since 1970 and per capita income since 1975 to sanctions and political unrest. But sanctions did not really gain traction before the 1980s. The United Nations imposed an arms embargo in 1977, but South Africa easily trumped that. Financial sanctions came in 1985, and the Comprehensive Anti-Apartheid Act in the US in 1986. That means something else happened in our economy before sanctions to cause the decline from 1970.

Decline – A Regulated and Rigid Economy

The answer lies in the structural inefficiencies and monopolies we practised in the 1970s. In agriculture, control boards kept a heavy hand on farmers, competition and productivity; in telephony, one had to literally wait months for a telephone line from the (state) monopoly supplier; in transport, it was a misdemeanour to transport one’s own goods beyond a certain range without a permit (one had to use Transnet’s predecessor, the South African Railways and Harbours); there was only one domestic airline in the sky; broadcasting was effectively monopolised by one big (state) broadcaster; the television industry was tightly controlled with ‘pay-tv’ bringing limited competition only in 1986; and the pension fund and savings industry was dominated by a few big companies. Then we are not even talking about the myriad of race-based laws and regulations that inhibited productive economic activity.

All of these combined to push South Africa’s productivity down. Inevitably incomes followed and declined from 1975 onwards. South Africa got poorer. The decline in productivity and income was accompanied by an expensive border war and the increasing cost of political deadlock. The result is that South Africa simply started running out of money towards the end of the 1980s.

These had the most interesting results in the 1990s. While everybody’s attention was focused on the release of Nelson Mandela, political change and constitutional negotiations, a lot of structural changes occurred in the economy, unnoticed except for those involved.

Cabinet stopped setting the price of bread in 1990 (yes, that is how the bread price was determined); transport was deregulated in 1991; agriculture was completely deregulated by 1996; broadcasting was opened up in 1994; free to air tv was established in 1998; two cell phone companies started to operate just before the 1994 election; import tariffs were reduced and vast swathes of the South African economy opened up to foreign competition; the state’s housing policy was changed to require ownership for all state-subsidised (RDP) housing; in a single decision in 1990 FW de Klerk set the SARB free to pursue interest rates independently from cabinet inputs; and following the De Kock Commission’s reports, major changes occurred in the financial markets and pension fund industries from the 1980s already.

Some changes were driven by technology (cell phones); some were the result of regulatory changes (broadcasting and tv, and Usury Act changes, which paved the way for Capitec); some were the result of changing politics (broadcasting and television); some just resulted from commercial pressures that could no longer be ignored (agriculture and transport); and some from new thinking globally (monetary policy and financial services).

There was no grand plan to these changes – they happened in a haphazard and uncoordinated way in the noise and din of the political transition. Combined they constituted considerable structural change that spurred productivity and gave us that long trend of improvement from 1994 to 2014. By 2014, productivity, measured on an index, stood at 104,8 versus a low of 64 in 1992 – that is an improvement of 64% over 22 years (see graph above). Not a bad performance, particularly for a country going through profound political change.

However, the world does not stand still − technology and work practices keep changing, and competition does not stop. As the effect of the changes wore off, productivity also tapered off and by 2019 it was again negative like in the 1970s. Not surprisingly, economic growth has stalled. South Africa has now been in a recession since the second half of last year. The Supplementary Budget illustrates to what extent the country has run out of money – just like it did in the late 1980s.

South Africa clearly needs another bout of structural reform to spur productivity and growth, and Finance Minister Tito Mboweni has been on a mission about that. The Treasury’s proposals were officially adopted by Cabinet, reflecting support from the President and at least from most cabinet colleagues. Regrettably, the debacle on SAA is casting a long shadow over government’s commitment to these proposals. Hopefully that sorry saga will come to an end soon.

In the meantime, structural reform is proceeding apace in at least two sectors: electricity and broadband. (Both areas are included in the Treasury paper.)

Nothing is more important than lifting the electricity constraint on the South African economy. We have written a lot on electricity reform and will save you the repetition (see our four notes of March 2019, October 2019, December 2019, and March 2020). Suffice to say that since February 2019 we have been launched on a completely different trajectory on matters energy. Granted, load shedding makes that difficult to believe. But recent suggestions in some media that load shedding proves ‘nothing has been done’ on matters electricity, are false.

The benefits of better internet connectivity are well known. The trick is to expand connectivity to society at large like South Korea has done. Spending on connectivity would be infinitely better than spending it on an airline. So far, the regulator is on track to auction additional spectrum by November.

A third area for which there is a new-found enthusiasm in both the public and private sectors is infrastructure (also in the Treasury paper). All wax lyrical about the benefits and they are, of course, correct. For the short term, however, I do not put much store in the new enthusiasm.

First, we must ask: what is different from 2014 when infrastructure was also a strong political priority? At the time we even got an Infrastructure Act, 18 large projects (known as SIPs), overseen by a Presidential Infrastructure Coordinating Commission and Ebrahim Patel was effectively minister of infrastructure (although he had a different title). What is different now? There is now an explicit recognition by the state that it cannot do it alone and it wants to involve the private sector, both on technical and financial matters. That is good, but it will take time to establish
these new partnerships. Then there are the legal contracts, financing agreements, project co-ordination – and these things take time.

Infrastructure must happen – and will happen in due course – but I doubt it will pull South Africa out of a recession in the short term.

In the areas of labour law, visas for incoming tourists, business start-ups and better co-operation between government and the private sector, a lot of changes were introduced in 2019 already (see our note of November 2019). These changes will add to what is happening in energy and spectrum release. Covid-19 has of course interrupted everything, with load shedding and the SAA debacle souring the mood considerably.