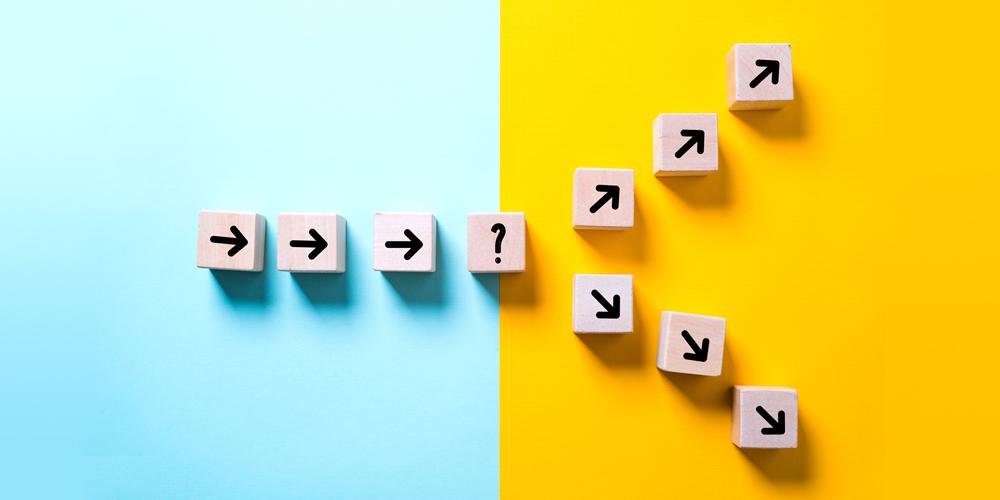 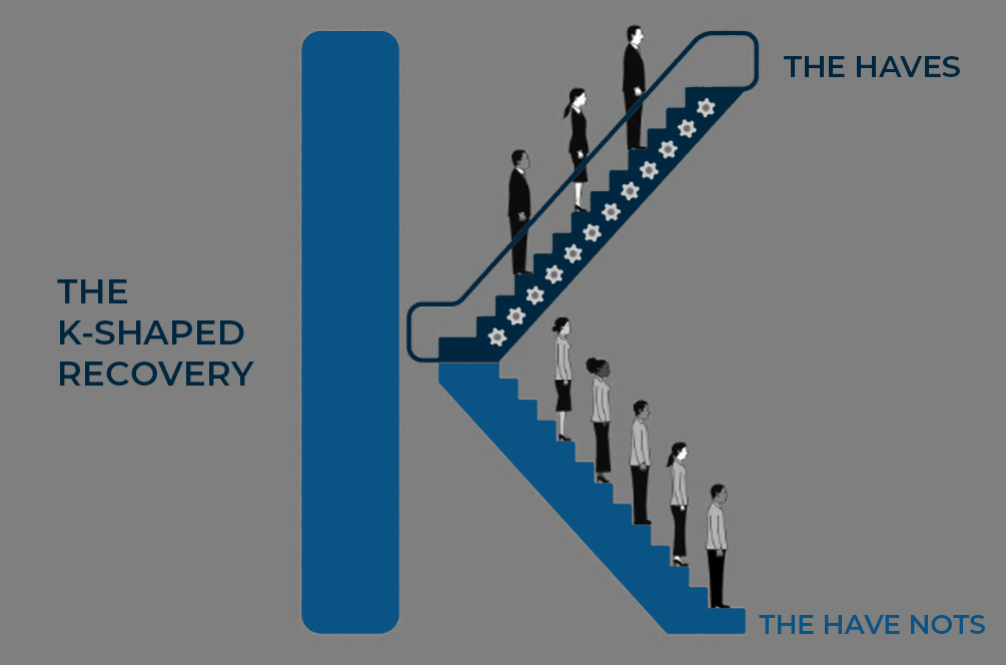 So far, the recent COVID-19 driven market crash has followed a classic V-shape given the speed at which markets both fell and then recovered to pre-crisis levels. It remains to be seen whether the recovery can be sustained or whether it evolves into a W-shaped crisis.

However, the concept of a “K-shaped” recovery has gained widespread traction following the latest market recovery. As the diagram shows, the “K-shaped” recovery concept refers to the fact that the fortunes of some in the economy has mostly recovered, while others are still in despair, or failing to recover as quickly.

There are two main drivers of the different experience of “the Haves” and “the Have Nots”: the divergence in rates of unemployment levels by segment through COVID, and the level of ownership of financial assets.

“The stock market isn’t the economy. The economy is production and jobs, and there are shortfalls in virtually every sector of the economy.”

Janet Yellen in an interview with The Washington Post.

The emergence of the coronavirus and the subsequent lockdowns in many countries resulted in significant job losses as businesses were forced to close their doors and customers stayed away. But this impact was not uniform across all sectors of the job market – for example, many financial services businesses were able to continue to operate while unemployment devastated those working in the construction, retail, travel and entertainment industries. The new “work-from-home” economy also meant that many professionals were protected as they could perform their jobs entirely from home. This was not the case for those working in a wide range of manufacturing and service industries where continuing to work from home was simply not an option.

This translated into higher job losses for lower earners relative to higher paid professionals, as shown in the graph below. There has also been a slower recovery of jobs for those in lower paid roles as the economic recovery takes time and online retailers have accelerated their market share gains. Those with earnings below $14 per hour experienced significantly higher levels of unemployment at 32% while the professionals earning a higher wage experienced very low levels of unemployment and have recovered well. 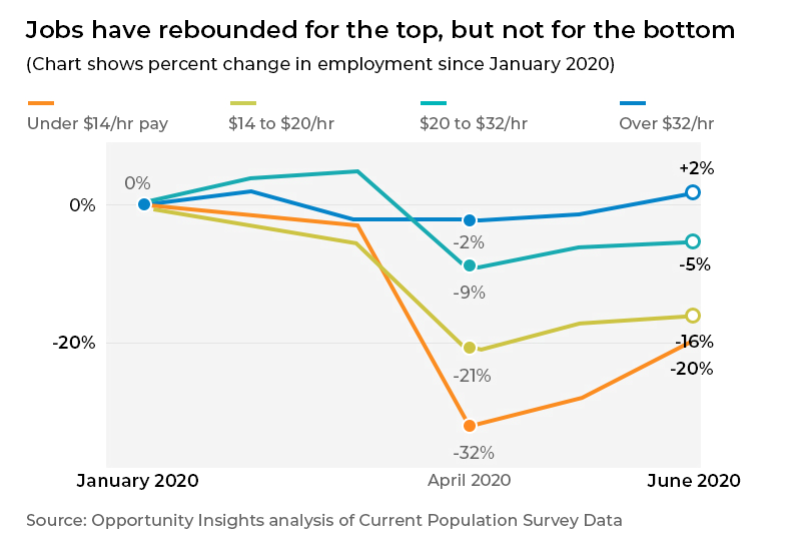 Governments around the world have provided varying levels of relief for the unemployed which has helped to mitigate the short term challenges, but the future is looking increasingly uncertain as the subsidies come to an end, unemployment remains high and evictions start to rise as rental payments are missed. A recent headline in the Washington Post talks to this K-shaped recovery: “2020 is the summer of booming home sales — and evictions”. The wealthy have been presented with an opportunity to buy real estate at depressed prices while many in the market are facing eviction as they are unable to afford their rental payments.

“This pandemic is causing suffering and losses,” Yellen said. “Individuals and businesses are not going to make it through this unless they get grants, and only the federal government can do that.”

Janet Yellen in an interview with The Washington Post.

In the US, the difficulties in reaching agreement between political parties means that the burden of supporting the economy has fallen on the Federal Reserve (the Fed). They have responded through Quantitative Easing (QE) which resulted in trillions of dollars being introduced into the US financial system to provide liquidity in markets and aid struggling businesses. This has been done through reductions in the benchmark interest rate and through the buying of US treasuries. The Fed is not in a position to be able to pay individuals any form of subsidy directly (that is something that the Federal Government would need to approve). The ability of the Fed to help the poor is limited – in fact, there is very little that the Fed can do to help “the Have Nots” keep their small businesses going or to pay their rent to avoid eviction.

The Fed’s actions have resulted in a sharp recovery in investment markets as investors see the Fed being ready to “do what it takes” to help the asset price recovery. This is done through being a buyer of a broad range of financial assets where liquidity may be limited and through keeping interest rates at record lows. These actions have helped investment markets to recover post the COVID-19 crash which helps “the Haves” with investment portfolios and retirement savings.

Rising asset markets exacerbate the rift in fortunes because of the concentrated or limited ownership of assets. Most households do not directly own stocks or bonds, and even via retirement accounts the rate of ownership only reaches roughly 50% of households. For housing, typically around two-thirds of households own their dwelling. Therefore, many households do not benefit from a recovery in asset markets. The disparity is also highlighted by the regular headlines talking to how certain CEO’s of listed technology businesses have seen their net worth increase (on paper at least) by tens of billions of dollars.

In the US, the picture is further complicated by the fact that only a very limited portion of the stock market is enjoying a K-shaped recovery. The S&P 500 can be seen as a broad representation of corporate America, but in fact only a limited number of companies are looking “healthy” based on share price performance. The graph below shows how the performance of the big six technology stocks has driven markets. The FAAANM stocks or Facebook, Amazon, Apple, Alphabet (the owners of Google), Netflix and Microsoft, have materially outperformed while the rest of the US market has mirrored the rest of the world, thereby creating a K-shaped recovery of Big Tech vs the rest.

“A riot is the language of the unheard.”

What does this all mean? Do the rising levels of inequality matter? Will the divergence in fortunes impact the future of economies and markets?

At some point, the real economy does start to have an impact on asset prices. The Fed is hoping that they are able to continue providing support until the economy has recovered and “Main Street” catches up to “Wall Street”. The challenge for asset markets is to ascertain whether there is a point at which the debt is too much for an economy to handle.

There is also an orderly process for handling the closure of a business. Companies file for bankruptcy and despite the pain and anguish, the end is procedural. For individuals, there is no perception of order when poverty permeates. The hopeless feel powerless and unheard – the massive, global social protests speak to the voicelessness felt by many. The two paths of the K-shaped recovery certainly play their part in this. The end of many government subsidy programmes is coinciding with financial markets hitting all-time highs. Governments and policymakers would be remiss not to take this growing economic divide into consideration now. If we ignore the challenges that the K-shaped recovery presents, it could easily lead to an L-shaped recovery for all.