“…but in this world nothing can be said to be certain, except death and taxes.”

Benjamin Franklin’s quote has become quite pertinent given the recent push by the large developed economies to set a global minimum tax level.

For years, large multinational corporations have been employing tax avoidance practices to exploit gaps and mismatches in tax laws, shifting profits to lower tax jurisdictions to reduce the amount of corporate tax they pay. This was first brought to the public’s attention in 2012 when Amazon, Google and Starbucks were hauled before the UK parliament to explain why their tax bills were so low. Shockingly, what came out was not the way in which they had broken the law, but the fact that they had not. Since then, governments around the world have been looking for ways to change the international tax system to better capture the appropriate tax income in the economies where the profit is earned.

In June this year, the finance ministers of the G7 countries[1] made a breakthrough and agreed on a proposal that aims to stop or reduce multinational companies from seeking out tax havens. On 1 July 2021, this proposal was agreed to in principle by a further 130 countries, which together make up more than 90% of global GDP.

What does the proposal entail?

At its core, the proposal attempts to address the issue of an outdated global tax system – as it is now widely recognised that the current international tax rules were built for a bricks and mortar world and are not suited to an increasingly intangible one. This is an important point because in this new digital economy, profits are mobile and are not always located where companies have the most employees or customers. This has allowed companies like Facebook to set up structures to allocate their profits to low-tax jurisdictions such as Ireland[2].

The proposal is broken up into two pillars. Firstly, the G7 delegates agreed to implement a global minimum corporate tax rate of 15%. This means that multinationals would pay a minimum of 15% tax in each nation in which they operate and any country that has a tax rate below that would need to raise it to the 15% minimum.

Secondly, once a company’s profit margin reaches 10%, the market countries (countries in which the customers are based) will be able to tax between 20% and 30% of all profits above that level. This overturns a longstanding principle of international taxation, which currently sees profits taxed where the value is created (defined as where a company’s head office or factory is based), and not where the products or services are bought.

What do they hope to achieve?

Over the years, this drive to pay less tax has led to several adverse consequences, however, the primary focus of this proposal is to increase global tax revenue.

It is estimated that approximately 40% of multinational profits, or $650 billion per year, are shifted to tax havens. The annual price tag on this type of activity is roughly $200 billion in global tax revenue[3]. The EU Tax Observatory suggested that implementing a 15% minimum tax would yield an additional $58 billion in tax revenue per year to the Eurozone. The Biden administration projected that this minimum could bring in $500 billion in tax revenue over the next decade to the US[4]. Over the past five years, 20 to 30 of the largest 100 companies have reported effective tax rates of less 15%[5], so there is significant tax revenue to be earned, albeit from a relatively small set of large global companies.

The biggest criticism of the proposal is the implication this could have for low tax countries, such as Ireland and Hungary, who depend heavily on tax revenue from foreign companies for economic growth and development. Ireland for example has maintained a tax rate of 12.5% since the early 90s, and because of this has attracted some of the world’s largest multinationals, including tech giants and large pharmaceutical companies. According to the Irish Finance Minister, if they raised their tax rate to 15% it could lead to a loss of over EUR 2 billion per year in tax revenue, roughly a fifth of their total tax income. This would be exacerbated should multinationals decide to leave Ireland. In a study by the Irish Fiscal Advisory Council, they estimated that if five of the largest multinationals left, it could cost the government EUR 3 billion per year and lead to more than 10 000 job losses. 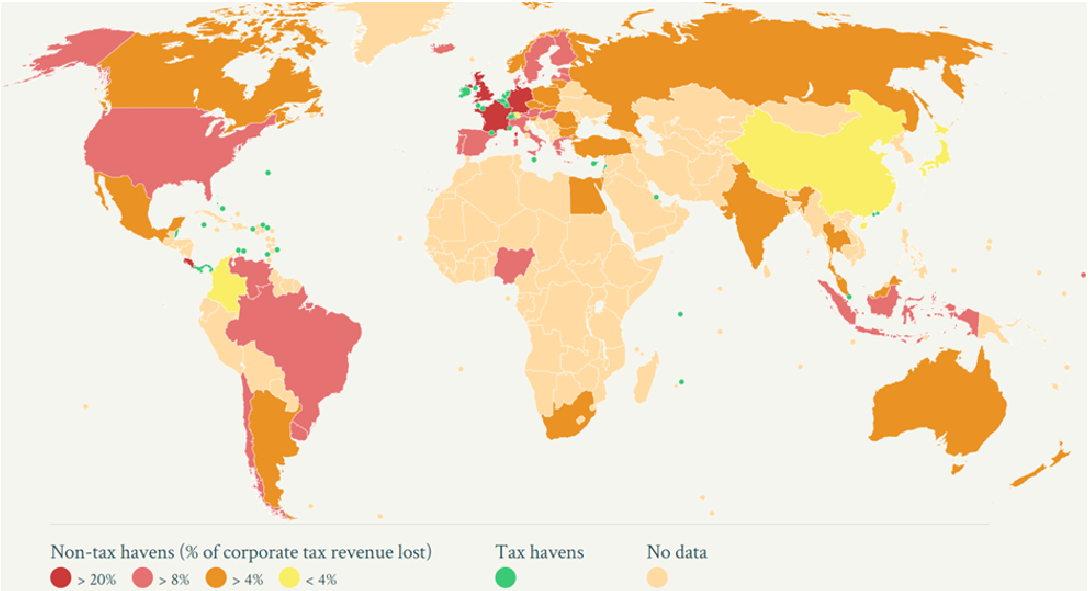 Generally, if a company were set to pay higher tax, this would reduce its profits and the market would tend to reduce the value of the equity, with a resulting decline in share prices. This is particularly sensitive given the fact that many of the most significant performers over the past decade fall into this category, such as Amazon, Facebook and Alphabet. This has not been the case, however, and the response thus far can best be described as a “collective yawn”.

There are two likely reasons for this:

Firstly, although this proposal has been agreed in principle, many investors do not expect it to be implemented as there would be too much resistance by the smaller tax havens.

Secondly, even if it were to proceed, the impact on profits in the large US tech businesses (the primary targets) would be negligible for two reasons:

Where to from here?

The next step for the G20 nations is to give their backing at their summit in October this year. This will be a bigger challenge as this group of countries includes several nations that have deliberately lowered their tax rates to attract global multinationals.

Another challenge – and probably the most difficult to achieve – is whether the proposal will be passed by the US Congress. In the past, Republicans have opposed corporate tax increases and some Democrats have also voiced their concern. It seems unlikely that the proposal would be passed in an evenly divided Congress, where two-thirds majority is required.

Although it appears that the intentions of this proposal are aimed at promoting an equitable global tax system, there are still many aspects that need to be ironed out and questions answered for it to gain broader global buy-in.

However, should this effective tax cartel be implemented, there will be a number of casualties including both companies and
countries.